Bayesian Modelling of Simulated Data from the Kingdom of Tamego

If a kindly man asked you in a job interview or on a first date or god forbid during a colonoscopy or something if you were interested in hearing about the loves and sorrows of his imaginary friends, you, a person of no mean sense, would nine out of ten times think he was crazy or, worse still, socially inept. Yet here you are reading about my own imaginary kingdom, with its made-up name, made-up queen and made-up war. I have nothing but praise for you, dear reader.

The previous post in this series was a fairy tale of sorts that related the story of an official in the Kingdom of Tamego who, having been tasked with estimating how many subjects were killed in a dreadful civil war, realised that the answer to his problem and the key to estimating population sizes with the kind of information that he had were so-called capture-recapture methods. In a breathtakingly ironic twist, he did not get the chance to bring his insight back to his queen but died instead a pauper in a remote district of the kingdom. We, however, can pick up and carry his torch into the modern age.

In this post I will describe a Bayesian model for estimating killings by each faction in the simulated Kingdom of Tamego data. The model is based on one described by Marc Kéry and Michael Schaub in Bayesian Population Analysis using WinBUGS and translated by Hiroki Itô into Stan. I was pointed to this technique by (and in general received a great deal of help from) folks at the Stan forums.[1] I have only made a few minor modifications. But before I get to those, it is worth going over how Kéry & Schaub’s original model works.

Remember, the problem is this. We have three factions – the Angu rebels, the king’s forces and the Zid separatists. Each of these took part in a devastating civil war and killed a certain number of people during it. Information on these killings comes from two sources: the official military records and a census carried out some years after the civil war had ended. Each of these lists contains the name and birthplace of the slain, so we know how many people are mentioned in both of these sources. That will be important later. 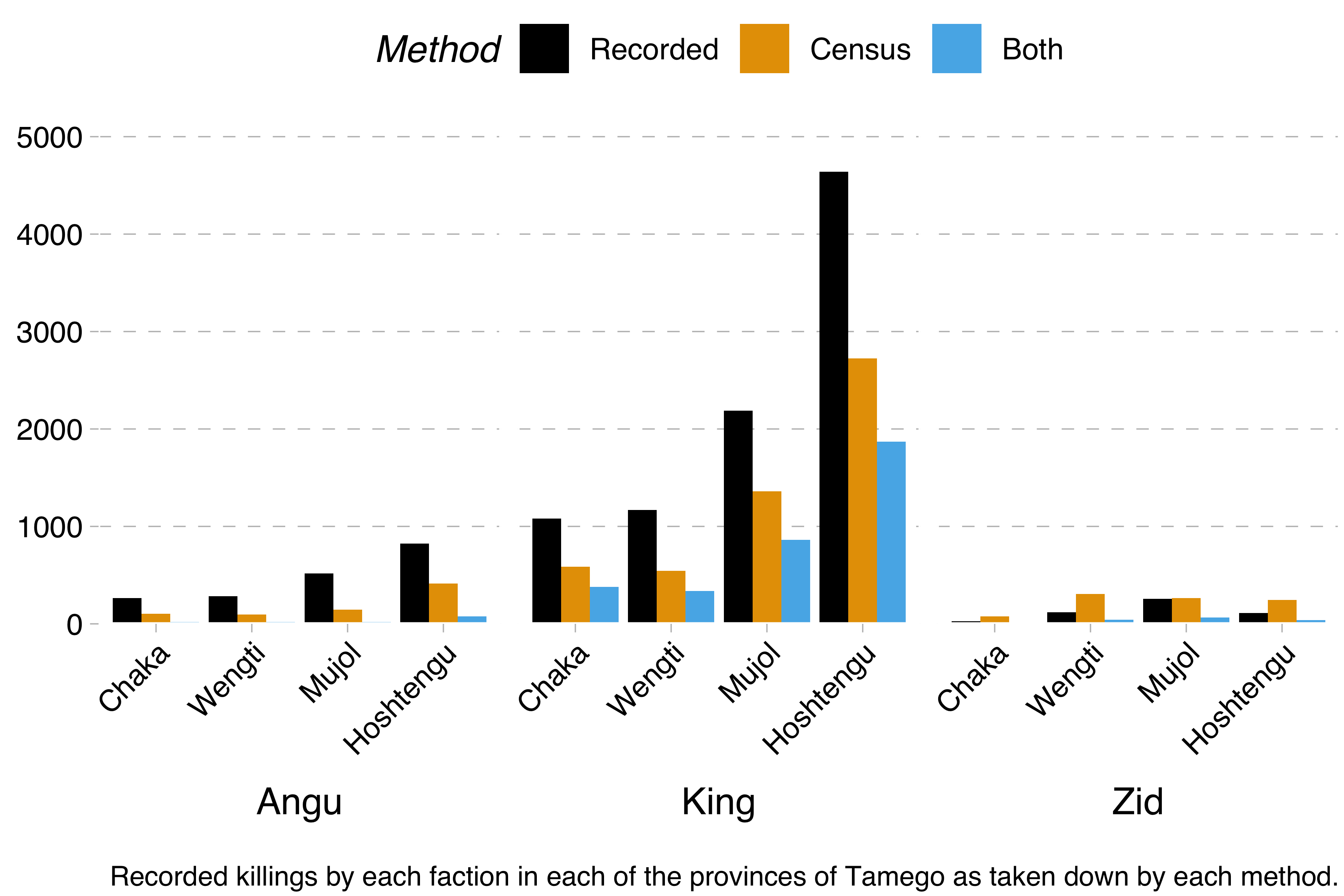 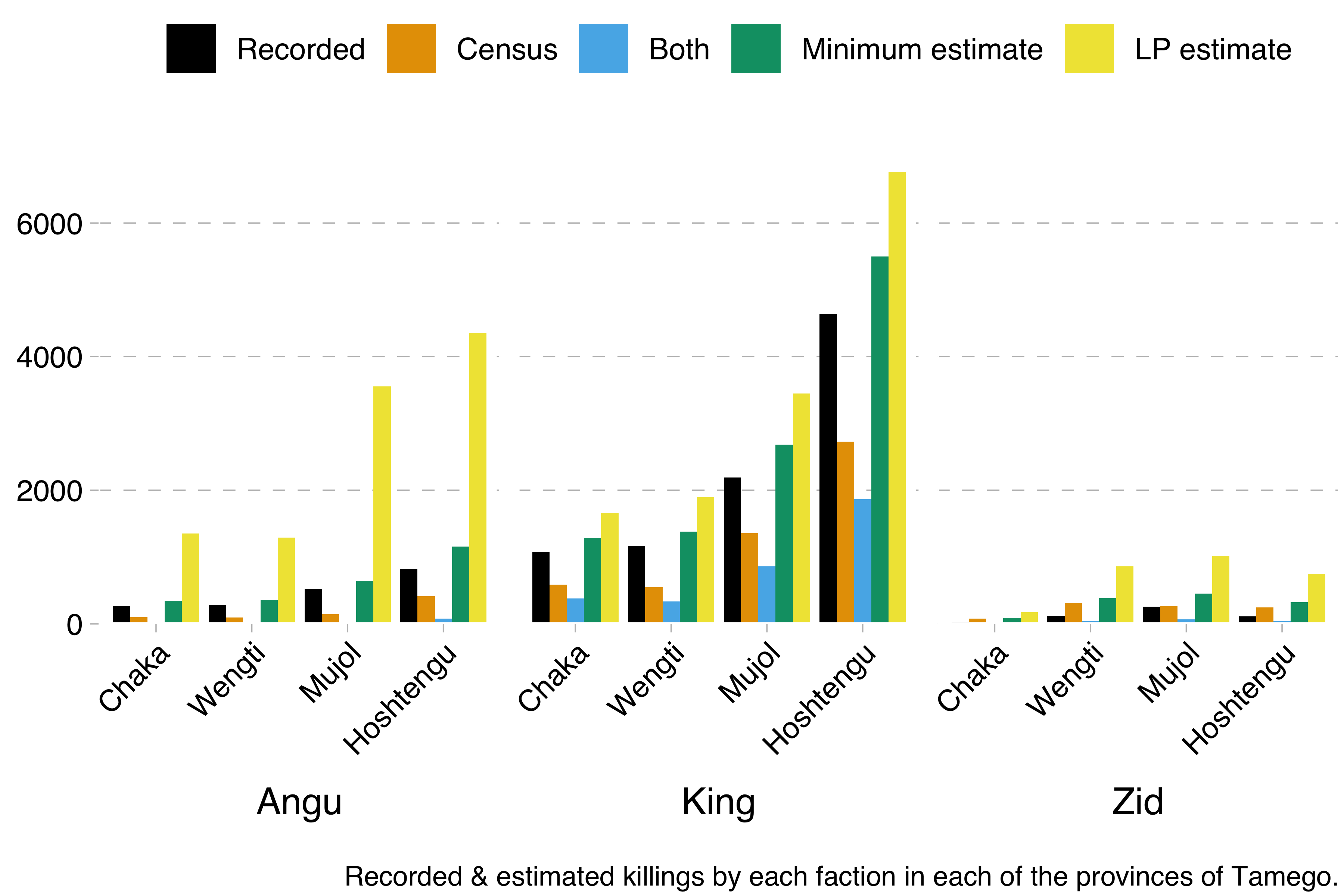 Now, we could have just encoded that formula in Stan. However, Kéry & Schaub’s model works differently. It uses something called data augmentation (a different sort from the one used to increase training sets in deep learning). The idea here is that you encode the capture-recapture data in a matrix, where each row is one individual and each column one observation (in our case, there would be one column for the official records and one column for the census data). Say for example that we have observed four individuals across two observations. We saw the first individual on both occasions, the second and third only on the first occasion and the fourth only on the second occasion. That would give us this matrix:

Then, instead of estimating the whole population size N, we recast the problem to one of estimating the inclusion probability omega, that is the probability that any member – sighted or not – in the augmented data set is part of the true population, N. Using this, we can then easily estimate the population. If we find out, for example, that omega_est = .6 in our toy example, it follows that N_est = omega_est * 10 = 6. So the task of the model is to infer omega.

This inference is done for each faction-region combination. But note that there are considerable similarities between the regions. If one faction had larger fighting forces or better military capabilities, for example, they might have killed more in all regions. Or perhaps it is likely that the official military records are biased in such a way that the king’s forces’ killings are better recorded than the rebels’ and separatists’. We can use this fact to our advantage by partially informing the estimate for each faction-region combination using data for the other factions and regions. This is called partial pooling, and it is my addition to Kéry & Schaub’s model (though as it turns out it is not clear whether it actually helps).

Finally we are ready to look at the code. We begin by declaring our input types:

Then we define the parameters – the unknown variables, those that we are asking Stan to estimate:

Then we define the model:

And finally we use the estimated inclusion probability, omega, to also estimate the population size N. This is made a little bit tricker because we want to define a different lower bound (the lower bound is the number of individuals known to be sighted in at least one of the observations, calculated with recorded + census - both) for each faction-region combination, which is not possible in Stan. Instead we have to calculate the number of additional individuals beyond the minimum amount (with a fixed lower bound of zero) and after that add the minimum amount to this estimate.

So what happens if we run this model using the Kingdom of Tamego data? This happens: 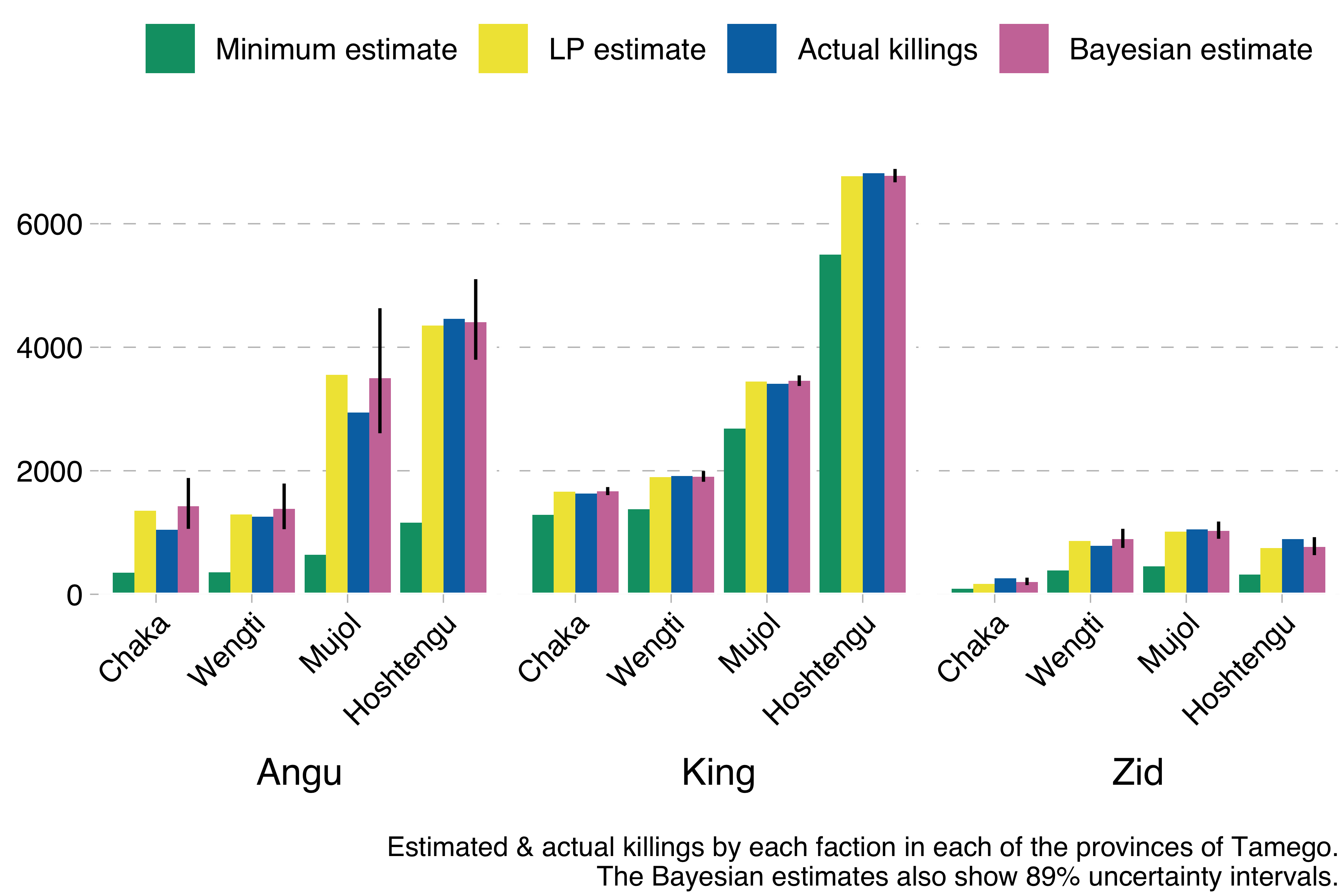 The model produces results basically identical to the much simpler Lincoln-Petersen estimates, but with the additional advantage of allowing us to compute uncertainty intervals. In the graph above I show 89% uncertainty intervals for the Bayesian estimate (the vertical line). These are much wider for the Angu rebel estimates, indicating that mean estimates for that faction are less reliable than for the other factions, which we also know to be true, because we have simulated the data and can see how far off the estimates are from the true values.

This is not a novel use of the capture-recapture method. It has previously been employed to estimate the number of Gulf War veterans who have ALS[2]; opioid use in Massachusetts[3]; software defects[4]; traffic injuries and deaths in Karachi[5]; and, indeed, killings in the internal conflict in Peru[6][7][8][9] among much else. This is in addition to its extensive use in population ecology. It is, in other words, an established method, to which I am not sure whether partially pooling faction- and region-level data actually adds anything; in future, I might use Hiroki Itô’s original model to make estimations on the same data and compare the results with my extended model. But even if my extension is not an improvement on the original, simpler model, doing this exercise has taught me a lot about population ecology, R, Stan and good Bayesian modelling workflows, which was the goal in any case.

I will end by observing that the model makes a number of assumptions. One of those assumptions is that the numbers of individuals whose names appear in both the official records and the census need to be large enough that the estimates are not noisy. The model will not capture uncertainty correctly if that is the case – it will be fairly confident yet utterly wrong. This will be the subject of the next and final post in this series.

You can find the code for the model here, though it is kind of messy and I am too exhausted with it all to summon the willpower to clean it up.