Separate an individual from society, and give him an island or a continent to possess, and he cannot acquire personal property. He cannot be rich.

Rome, once a mere collection of huts on a hilltop overlooking the Tiber, grew to become a vast and hugely influential empire. Why? That is, why Rome? Why not Alba Longa, by some accounts the oldest Latin city, the mother of Rome the daughter, and an important religious centre as well as the original head of the Latin League? Or Praeneste which we now know as Palestrina, or Tibur which we know as Tivoli, or Labici, or Gabii, Nomentum, Laurentum, Lavinium? Those other cities were situated in the same area, had similar soil and climate, spoke versions of the same Latin language and shared with Rome a common Latin culture (and were all, compared to the Greek city-states, fairly open to and connected with one another) (Boatwright, Gargola, and Talbert 2006).

Or why not one of the prosperous Etruscan cities in the north? Or one of the Greek colonies in the south? Or some or another city among one of the other Italic peoples, like the Umbrians or the Samnites?

Rome rose from obscurity to become a vast, prosperous and durable empire. It first outgrew the other Latin cities mainly due to its location as a nexus and its proximity to the wealthy Etruscans (75% confidence). If this is not the case, Rome does not get hegemony over Latium (70% confidence).

Roman culture then spread primarily through conquest (95% confidence). A key reason that this worked was the Romans’ unusually expansive and inclusive notion of citizenship, which increased its labour force, suppressed rebellious tendencies and gave conquered peoples a stake in the Roman venture (70% confidence). If this is not the case, the Romans don’t expand outside the Italian peninsula (60% confidence).

Rome was once no more than a sorry clump of villages. In the seventh century BCE, primitive huts began to be replaced by tiled roofs and stone foundations, and a marketplace (we know it as the Forum) was established below the Capitoline and Palatine hills, near an important crossing of the Tiber (Scarre 1995). Already in the sixth century, Rome had become one of the most prosperous cities in Italy (Boatwright, Gargola, and Talbert 2006). The last king of Rome was exiled into Etruria around 500 BCE, after which the Senate would found the Roman Republic. The fourth and third centuries were formative for the Republic: this was when its political system took a now familiar shape (Boatwright, Gargola, and Talbert 2006). It was also a period of expansion, and by the end of the First Punic War, around 240 BCE, the Republic spanned most of the Italian continent, from all Sicily in the south up to what is now Tuscany and Marche in the north (Scarre 1995).

If Rome was already economically successful long before it conquered Italy or even Latium, it seems likely that this was one reason for its subsequent military success.[1] A possible causal pathway is “some unknown cause X led Rome to prosper economically, which in turn led Rome to military success, which in turn caused Roman culture to spread”. And one excellent candidate for X is Rome’s location.

Rome is situated right on the river Tiber. The Tiber gave Rome proximity both to the sea and to the inland, in addition to protection from the Etrurians in the north. But there was also an important road heading north/south that crossed a ford in the Tiber just next to the city. Rome benefited significantly from its relationship with the wealthy Etruscans in the north, and indeed spent most of the century under the rule of Etruscan kings (Scarre 1995). 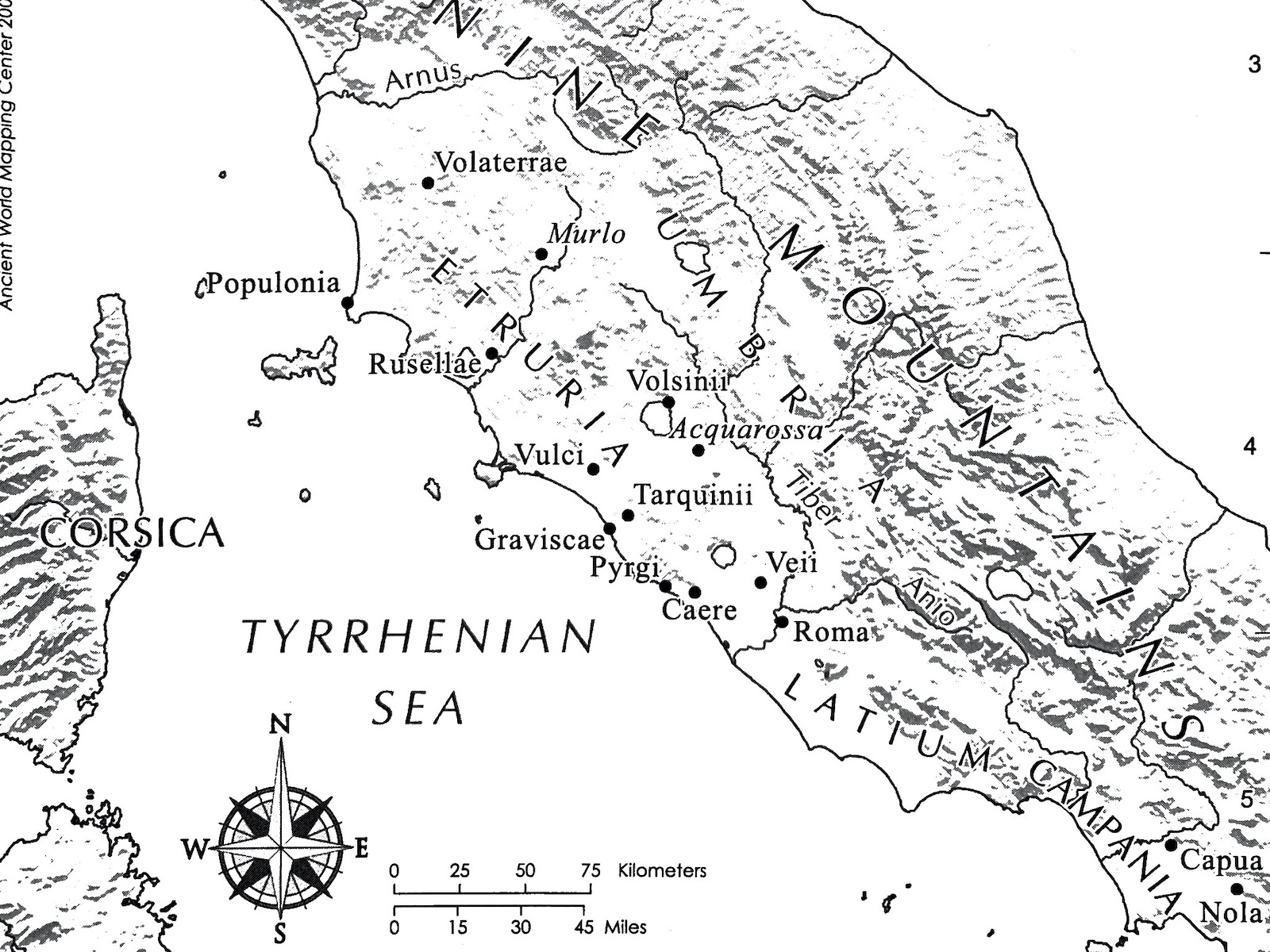 I think this is the main reason why Rome grew more prosperous than the other Latin cities, and that the counterfactual is that Rome never even attains hegemony over Latium. But presumably many other cities around the Mediterranean were militarily and economically well situated, and yet failed to encompass such huge territories. Even if location was a necessary reason, it was not unique to the Romans.

The normal state of affairs in Italy before Rome seems to have been one of fleeting domination and short-term wealth extraction. Warfare would often involve some wealthy aristocrat or warlord gathering a bunch of fighting-age men, going raiding and then, having seized land, cattle, slaves and booty, dividing some of it among his men (Boatwright, Gargola, and Talbert 2006). When Athens surrendered at the end of the Peloponnesian War, Corinth and Thebes – allies of Sparta – advocated its destruction and the enslavement of its populace (though the Spartans instead chose to make it a tributary). That is, when a group defeated another in battle, they would extract wealth on the short (looting, enslaving) and medium (extracting tributes under threat of further violence) terms.

Rome, too, looted cities, enslaved people and extracted tribute. But Rome, by contrast, also took conquered peoples into the Roman fold. For example:

We can find an example of this in Livy (1905), here describing the Romans’ victory over Politorium and other Latin cities:

[Ancus, the fourth king of Rome,] took it by assault, and following the custom of the earlier kings who had enlarged the State by receiving its enemies into Roman citizenship, he transferred the whole of the population to Rome. The Palatine had been settled by the earliest Romans, the Sabines had occupied the Capitoline hill with the Citadel, on one side of the Palatine, and the Albans the Caelian hill, on the other, so the Aventine was assigned to the new-comers. Not long afterwards there was a further addition to the number of citizens through the capture of Tellenae and Ficana.

This mattered because it allowed Rome to effectively leverage resources gained through conquest into further successful conquests. New tactics that the Romans had adopted, and a general trend towards large-scale warfare (as opposed to small-scale raiding), favoured armies of greater numbers (Boatwright, Gargola, and Talbert 2006). In addition to the advantages gained through looting, enslaving, neutralising an enemy and increasing agricultural yield, not to mention adopting new advantageous technologies, norms and practices, Rome would also conscript many of the conquered men into the Roman army. That set off a feedback loop which caused Rome to gain resources via conquest, turn these resources into military strength, and use that military strength to seize more resources, etc.

Not everyone in Roman territory had equal rights. Women, citizens of client states and freedmen either had limited forms of citizenship, or did not have citizenship at all. Slaves, legally speaking, were not considered persons, but property. But to those who had it, citizenship was a great boon. First, it granted legal rights. Second, it was high status. Official Roman writing would often refer to “the Roman people”; treason, for example, was a crime against “the dignity of the Roman people”, and allies of Rome were “allies of the Roman people”, and so on (Woolf 2001). If you were Roman, you mattered. 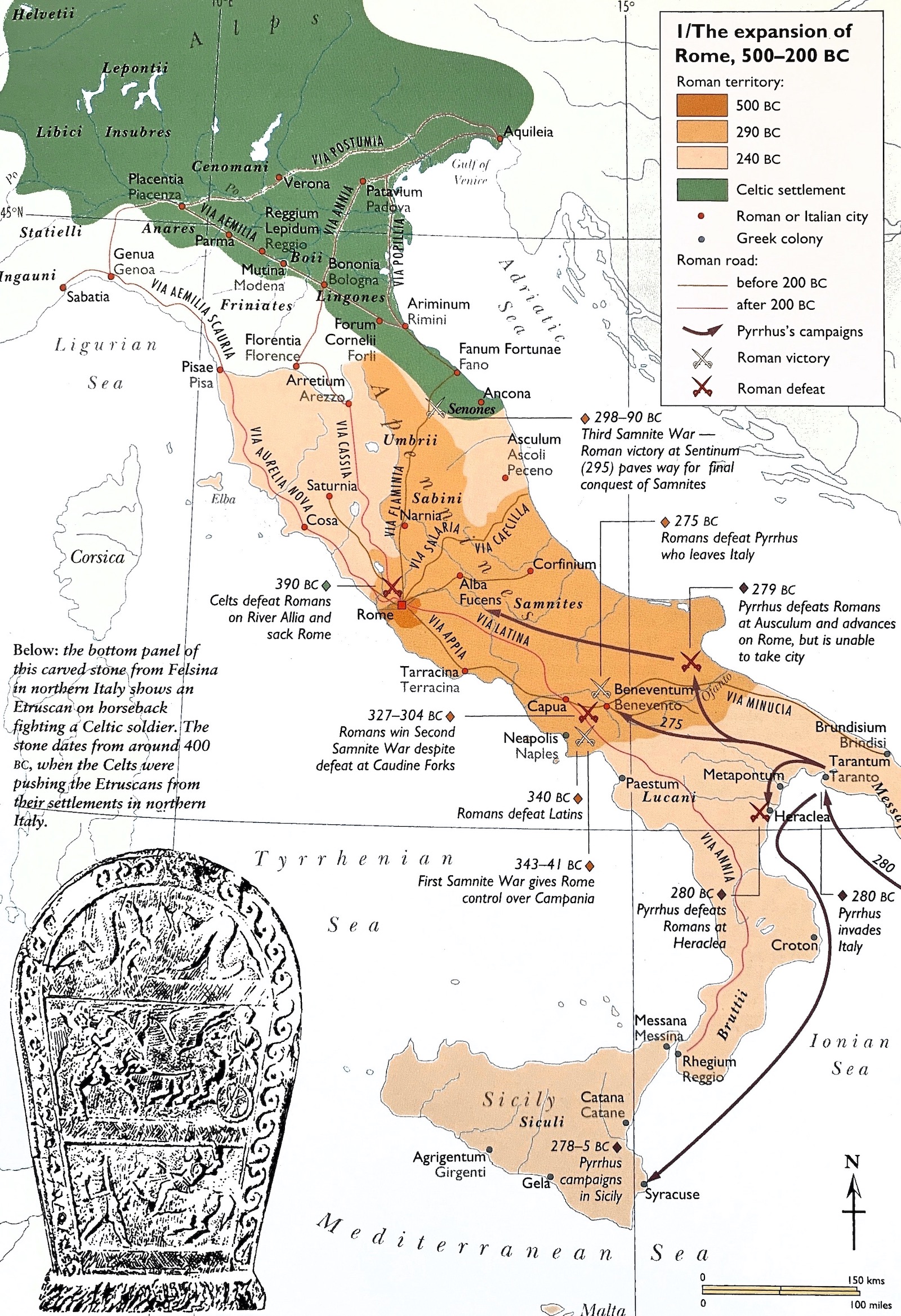 Now there were other great empires before Rome – did they become great in the same way? I think what matters is that the conquered people (1) aren’t killed, so they can provide labour and soldiers for the conqueror, (2) are allowed to remain in relative freedom, so that they can prosper and keep producing value, and (3) gain some stake in the venture, such as citizenship. I suspect you can find lots of examples of (1) and (2), but few of (3).

The Neo-Assyrian Empire used mass-deportation to keep rebellious regions in check. (Presumably this is the model followed by school teachers when they separate troublemakers in their classes.) Deportation was useful, says Wikipedia, because one, multi-ethnic populations reduced tribalist sentiment and two, living subjects could be used for slave labour or in the army. (They sometimes just killed everyone and razed the city to the ground too, though.) I could not find anything indicating that these subjects had a stake in the Neo-Assyrian project.

After the Han Empire defeated the nomadic Xiongnu, it incorporated them into the Han army in order to war against other nomadic groups in the north, however, they were required to send a prince to the Han court, as a hostage and to pay homage and tribute to the Emperor, which makes me think they were not entirely enthusiastic about it.

Where conquest previously was mostly robbery and destruction, Roman conquest was, in addition to those, also a form of investment. An investment involves putting resources into a venture with the expectation of getting more resources out of it in future. For Rome, the resource was manpower and the venture conquest. These investments would have been highly risky but also had the potential for large returns. They might have been the only investments of that magnitude available to city-states or empires at that time.

A modern example of the same phenomenon is Facebook buying companies like Instagram and WhatsApp. But where modern corporations can raise money by borrowing or issuing stocks, Rome could only do so through the revenue gained from its own investments. That might seem obvious, but if the natural inclination of individuals is to spend or save, and to pursue wealth only when one’s purse is getting lighter, then Roman policy seems far-sighted.

Another difference is that modern corporations generally invest with the consent of the venture invested in. Rome invested by force. I’m speculating here, but it seems to me that granting citizenship to some of the conquered people would have helped Rome recuperate on its investment. Say a representative of the Roman army arrives to conscript young men into the Roman army. What I’d expect to normally happen is that the people of this city collude to hide many of its young men from the recruiter, because a man not in the army is a man who can till fields and build houses. But if (1) some members of this city, possibly the most powerful ones, have Roman citizenship, and therefore benefit from Roman prosperity, and (2) service in the Roman army offers a path to Roman citizenship, these people would not only not collude, but even prevent anyone from trying to hide from the Roman recruiter.

When I started writing this, I tentatively thought that maybe Rome got some sort of “head start” among the Latin cities, which “locked it in” on the road to domination and infamy. I now think this was right in the sense that Rome did outgrow the other Latin cities economically early on, but also wrong in the sense that this probably wasn’t enough – that it took something more (citizenship) to leverage this head start into sustained success.[3]

If it is true that the Romans were innovative in their expansive notion of citizenship, and that this was an important cause of Rome’s expansion, one has to wonder why this was not invented earlier. I can think of several possibilities: older citizens not wanting to dilute the status of citizenship, myopia, failure to see the policy’s advantages, risk aversion and plain old-fashioned tribalism. Another possibility is that it was invented earlier, but I (or we) don’t know about it.