Tech companies these days are under immense pressure by activists, employees and the media to hire more people from minority groups. The CEOs of these companies are feeling the pressure. They set up diversity working groups, appoint Vice Presidents of Social Impact, make pledges, hire consultants, release statements, offer trainings, invite speakers, launch initiatives and sponsor apprenticeships. They change their logos, their ads, their walls. They also set goals. These goals are not always made public, but you can be sure that they exist. Somebody might even be accountable for them.

All this may be sincere, or it may not. More likely, it is sometimes sincere, sometimes cynical and sometimes just the sweaty, desperate acts of men intensely aware of the Damoclean sword dangling over their head.

The less material actions – the goals, pledges and press releases – may at first glance seem ineffectual – they could, after all, easily be ignored or forgotten, and there is no law upholding them – but they are in fact pretty useful to activists. Because activists can’t just advocate for specific actions. Before they do that, they must get management to agree that diversity is worth doing something about at all. Having done that, they get management to set goals – and why wouldn’t they, having just agreed that this is worthwhile to pursue. Only then can they advocate specific actions, and a good thing it is, too, because otherwise how is the company to reach their newly minted goals? It all functions sort of like a ratchet.

Besides diversity, equity and inclusion advocacy being an important phenomenon with far-reaching effects on the modern workplace, it is also pretty interesting to think about how these aims can be pursued in practice. Take for example diversity hiring. On the surface, it is a simple problem with a simple solution: the way to increase minority representation in an organisation is to hire more people from minorities and to retain as many employees from minorities as possible. But of course it’s much more complicated than that. How many people you can hire depends on how much your organisation is growing, and on its attrition rate (the percentage of employees who leave the company each year). How many people from minority groups you can hire depends on the proportion (and absolute number) of people from minority groups among potential hires. Attrition rates are different in different subpopulations. And so on.

(There are also likely regional differences here. Japanese companies, for example, seem to be much less willing than U.S. companies to employ people with an uncertain impact, even if their expected impact is higher than the safer choice. That is because Japanese workers are often employed for life, so false positives are more costly, whereas U.S. workers can more easily be fired. Also in Japan, it seems hiring is often the responsibility of the human resources department alone, such that it will adopt a low-risk strategy in order to avoid blame for bad hires. On the other hand, there is also an association between employment protections and women workforce participation generally, though of course correlation is not causation, and the reverse relationship was found for temporary contracts.)

Being curious about when we could expect big tech companies to reach something like gender parity, I created a Metaculus question asking just that. There are no predictions yet as the question has only been open since late yesterday evening.

I had wanted to try out the Julia framework Agents.jl and thought this might be an interesting problem. So I built a simple model to simulate how various strategies in diversity hiring might affect the constitution of a set of companies’ workforces.

(Obvious warnings here are that this is not peer-reviewed research by a domain expert and that the model makes several important assumptions, which I will outline later. I should also point out, if it wasn’t clear already, that I am not making any kind of normative argument about diversity, equity and inclusion work: this essay is neutral on its qualities or lack of them.)

The model works like this. It supposes there are 100 companies, each of which employs 500 workers. It then steps forward 25 years one by one, and at each year:

As you will have noticed by now, to make things simple, the model is concerned only with one dimension of diversity – gender of the binary sort (sorry, enbies). It also assumes

Here are the results of the nine runs I made. They show the average proportion of women in a company over time. 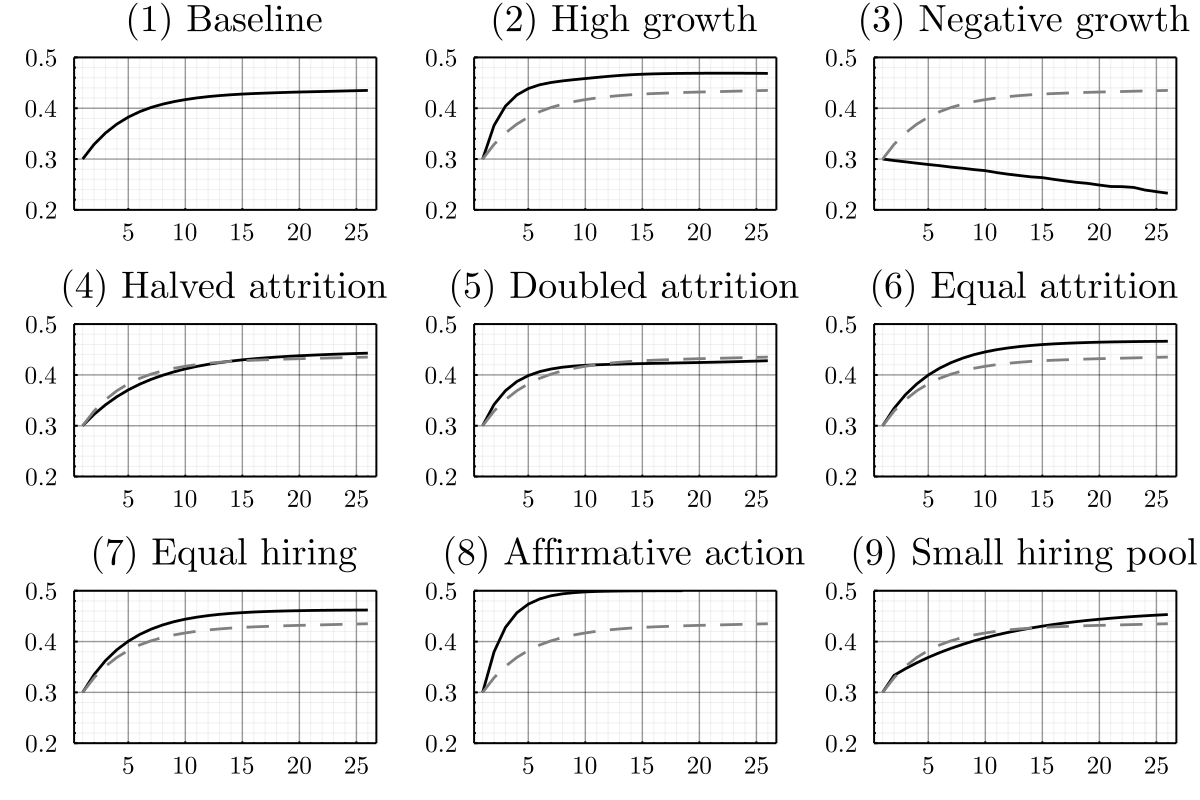 Looking at each of these in turn:

One takeaway from all this is that it is a lot easier to increase diversity for a company that is growing. That means we can expect scaling startups to be better able to increase diversity than companies like Oracle, for example. We should also take care when comparing newer companies with older companies – if a company grew quickly when the industry was less diverse, it will have a large workforce that is quite uniform, and that takes a long time to change through hiring alone.

But I think my main takeaway here is that it will be a long road ahead if the tech industry is ever to reach gender parity, assuming it does not start implementing some sort of affirmative action. Given reasonable assumptions about company growth, attrition rates and demographics of companies and graduates today, even if hiring is wholly equal, it still takes many years to approach parity.