This post is part of a series on the health effects of veganism:

Follow-Up on the Health Effects of Veganism: Mental Health

A year and a half ago I wrote a post on whether veganism can be healthy. The short answer was “most probably yes, if you supplement wisely”[1] But one thing I was unsure about was its effect on mental health and cognitive function. (In hindsight, I think I should’ve emphasised this uncertainty more in the original post.) Since then, a few new studies have come out looking at some aspects of those. If I did this for a living, I would’ve read these carefully and composed a thorough review, but as this is only a blog, I’ve only skimmed them and written down some quick thoughts, which I’ll now share.

Dobersek et al. (2021) is a meta-review looking at 18 studies, mostly of Western populations. It finds that “the majority of studies, and especially the higher quality studies, showed that those who avoided meat consumption had significantly higher rates or risk of depression, anxiety, and/or self-harm behaviors”. But as the authors note, the studies they look at are almost all observational: though they condition on this and that, in the absence of randomised controlled trials (RCTs)[2], we shouldn’t draw any conclusions about causality here.

I took a closer look at a few of the studies they cite. Interestingly, they judge the sole RCT included, Beezhold and Johnston (2012), to be of “very low” academic rigour and list it as favouring neither meat-eaters nor vegans/vegetarians. It does have problems (small sample, short duration, multiple comparisons, etc.), but another meta-analysis judged it to be of relatively high quality (though still flawed) (Iguacel et al. 2020). I thought this was a small reason to be sceptical.[3]

Overall, I’m not very confident in Dobersek et al. (2021), though I’m not sure if that’s because of the study itself, or if my judgement is clouded by the fact that it was funded “in part via an unrestricted research grant from the Beef Checkoff, through the National Cattlemen’s Beef Association” (on its website, the Beef Checkoff program is described as “a national marketing and research program designed to increase the demand for beef at home and abroad”). Presumably, the authors wouldn’t have gotten funding if the funders didn’t expect them to produce a favourable paper. That doesn’t mean it’s bad research, it’s just another reason to be somewhat sceptical. Either way, the paper doesn’t help us tease out any causal effects.

Iguacel et al. (2020) is another meta-analysis that looked at 13 studies, mostly carried out in the US (three of the studies were on non-Western subjects). It concludes that veganism/vegetarianism is “related to a higher risk of depression and lower anxiety scores, but no differences for other outcomes [stress, well-being, memory impairment] were found”.

Okay, but in the results they look at two kinds of studies, one that encodes depression as a continuous variable, and one that encodes it as a categorical variable. The 13 studies of the first kind show “no statistically significant differences […] between vegetarian or vegan diets and omnivores”. The two (cross-sectional) studies of the second kind show that “vegetarians and vegans had a higher risk of depression”. So, eh, I’m not sure what to make of this – maybe a tiny update if favour of a veganism/vegetarianism-depression association?

The authors make lots of subgroup analyses, but I don’t see any mention of correcting for (or considering) multiple comparisons. The studies included are mostly observational in any case, so once again I don’t think this says much, if anything, about a possible causal effect.

Thanks go to Michael St. Jules who pointed me to those two meta-analyses on the Effective Altruism Forum. Since then I’ve found one additional review: Jain et al. (2022), a meta-analysis that looks at 23 studies (two of them RCTs) and finds that the evidence on an association between veganism/vegetarianism and depression “is contradictory, possibly due to the heterogeneity of the studies analysed”. That’s similar to what the other two reviews found, which makes sense given that they seem to largely overlap in the studies they include.

So given these and other studies, it seems possible that veganism/vegetarianism is associated with depression. But if so, what causes the association? I can think of a few possibilities:

Those are some possibilities I thought of, but Hopwood (2022) has another explanation: it suggests the link is caused not by the diets’ nutritional features or anything else on my list, but by cognitive dissonance in those who try to reduce the amount of meat they eat. To me it’s prima facie plausible that there is an effect like this, though if so I have no idea how large it is. (I could also imagine the opposite effect, i.e. meat-reducers feeling better about themselves for trying to reduce their meat intake.) The study surveyed two samples of 759/766 meat-eating, 186/188 meat-reducing and 58/54 vegan/vegetarian Americans and found that the second group scored highest on various depression (or depressivity or depressiveness; it seems psychologists are quite inventive) surveys (my plot, based on data from Hopwood (2022)): 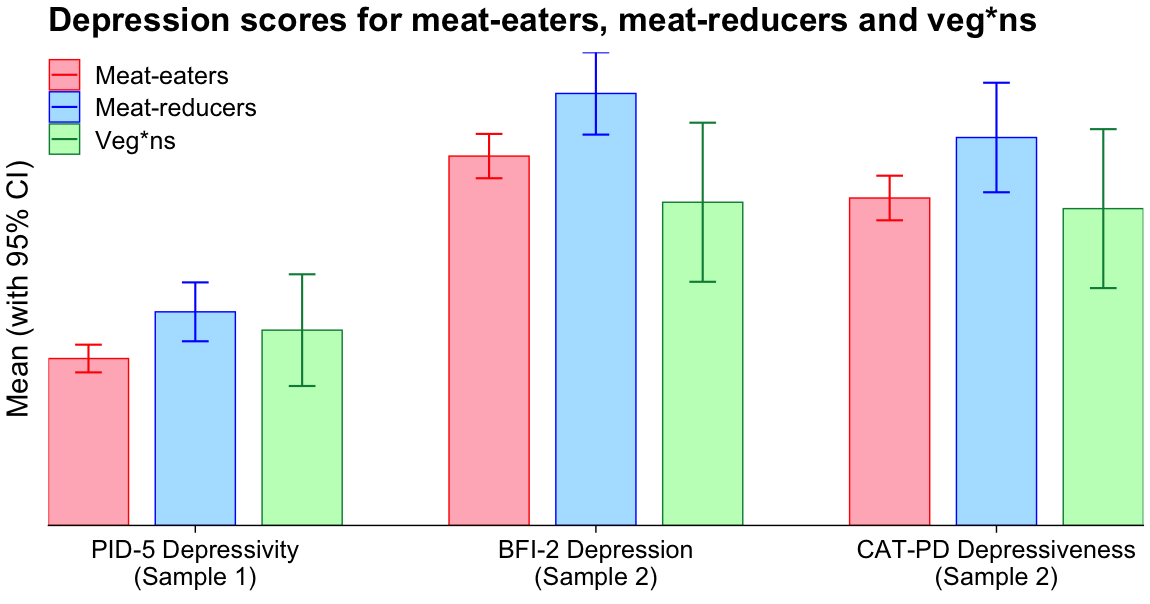 Interestingly, Çınar et al. (2022) analyses a sample of 9,319 Finnish twins and siblings of twins and finds that veganism/vegetarianism is 76% (!) heritable. Another study of 367,198 Brits identified a gene associated with vegetarianism (Fensom et al. 2020). I don’t know if this suggests there are some (heritable) psychological traits that influence whether one becomes vegan/vegetarian or not, i.e. in accordance with the “unknown factor → depression and veganism/vegetarianism” hypothesis. Maybe? I don’t actually know whether different heritable traits of this sort tend to be clustered in larger populations.