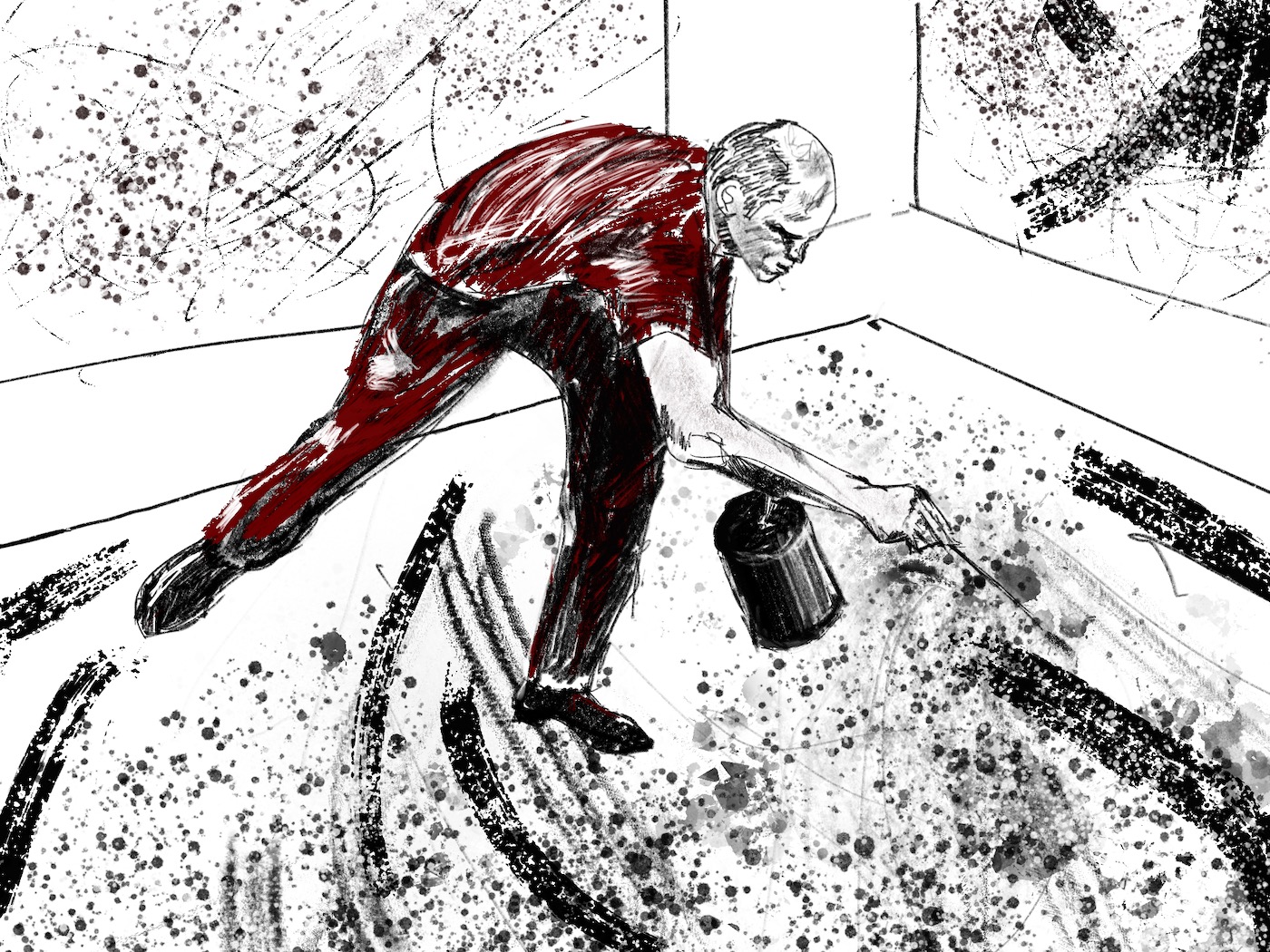 Let me tell you about this interesting study. Turpin et al. (2019) took a bunch of abstract artworks – some computer-generated and others taken from MoMA’s digital library – and assigned to these two types of titles, mundane ones (e.g. Canvas 8 or Version 4: Abstract Elements or Colour Mixing or Objects in Tint) and descriptive yet nonsensical ones (e.g. The Deaf Echo or Undefined Singularity of Pain or The Pathological Interior or Evolving Model of Dreams).[1] Armed with these, they ran four experiments.[2] (For some of the experiments, they also used a control group of paintings that were assigned no title at all.[3]) What they found was that subjects considered both varieties of artworks more profound if they were accompanied with a nonsensical descriptive title than with either a mundane title or no title at all.[4]

Now, I believe that meaning is closely related to association, that things have meaning for people if they can be connected to other meaningful things. Using that model, it seems perfectly natural for people to find more meaning in paintings with descriptive titles, even if those titles are nonsensical or nondescript, simply because they prompt the viewer to associate. The thing that mainly matters in a title is its ability to call to mind thoughts and memories in the observer. The lack of internal logic is – so I suspect – mostly a distraction. The point is the titles’ descriptive quality. But that was not how the authors chose to frame their study. Instead, they chose to call these descriptive yet nonsensical titles “pseudo-profound bullshit titles” and to name their paper Bullshit Makes the Art Grow Profounder.[5]

Here is how they define “bullshit”:

These statements (referred to as pseudo-profound bullshit)[,] while superficially impressive, are generated by a computer program randomly arranging a set of profound-sounding words in a way that retains proper syntactic structure; as such they lack any intent to communicate something true or meaningful. […] Research examining peoples’ susceptibilities to pseudo-profound bullshit have utilized [Harry G. Frankfurt’s] conception of bullshit as an absence of concern for truth or meaning. Thus, pseudo-profound bullshit is characterized not for its falsity but its fakery; bullshit may be true, false, or meaningless, what makes a claim bullshit is an implied yet artificial attention to truth and meaning.[6]

From what I can tell, the phrase “pseudo-profound bullshit” was coined by some of the same authors in a widely cited paper published in 2015.[7] You might wonder, as I did, if “bullshit” isn’t just a synonym of “nonsense”, but the authors will have none of that: “The Oxford English Dictionary”, they write, “defines bullshit as, simply, ‘rubbish’ and ‘nonsense’, which unfortunately does not get to the core of bullshit.”[8]

(The full definition in my digital version of the OED is “stupid or untrue talk or writing; nonsense”. I could go on to mention that the definition on dictionary.com is “nonsense, lies, or exaggeration”; Merriam-Webster’s is “nonsense; foolish insolent talk”; and that the one on Wiktionary is “false or exaggerated statements made to impress and deceive the listener rather than inform; nonsense”. Only one of these references the speaker’s intentions; three mention falsity; all four emphasise incoherence.)

A phrase like “hidden meaning transforms unparalleled abstract beauty”[9], the authors of that earlier paper write, is not only nonsense but also bullshit, because its structure implies that it was written to communicate something, and because it “does not contain adequate meaning or truth”. Somewhat bizarrely, they contrast that with a phrase that is, so they write, merely nonsense, not bullshit, but which is in fact, so I claim, not even grammatical: “unparalleled transforms meaning beauty hidden abstract”. What is that supposed to prove? That if you jumble the words in a sentence, you are no longer trying to communicate something? But what does that have to do with bullshit? This is all a little bit confusing to me. Is the difference there really between bullshitting nonsense and mere nonsense, or is it between grammatical nonsense and ungrammatical nonsense? Somebody draw a Venn diagram!

Of course, “bullshit” in this context need not carry any negative connotation. If the goal of a piece of art is to inspire the feeling of profoundness in its viewers, whether this feeling originates from the art itself or is created by the viewer is of no consequence. […] These predictions are not intended to be taken as a value judgment on the quality of modern art, nor a dismissal of the subjectively derived meaning formed when exposed to such pieces. If anything, the production of good and satisfying “bullshit” (i.e., statements meant to be impressive regardless of truth) may simply be part of the artistic process as much as the production of a painting.[10]

But that seems a little naïve. Of course bullshit does not need to sound negative. But in this world, in the year 2021, it does. On the one hand, they write that the production of good “bullshit” is a part of the artistic process, which does not imply any sort of value judgment. On the other, they define “bullshit” as “an absence of concern for truth or meaning” and write that it’s fakery. In one breath they imply that artists are conning their clientele, but in the next they assure us that they have nothing bad to say about artists. I wish they would just come out and say what they think instead of this nervous hedging.

But, well, fine. That is a semantic quibble. Another quibble would be that the experiments were carried out only with undergraduate students in a Western university.[11] But I am guessing that the results would generalise, at least in the West, so I won’t argue that either. A third quibble would be that several of the pseudo-profound titles they used were not, in fact, nonsensical, for example: Virgin Desire, Trapped, Reflecting Shape, The Beaten Angel and so on. These all seem like perfectly sane titles that would suit any number of abstract artworks. But fine, the majority of the generated titles were indeed nonsensical, so I will put that aside, too.

Bullshit as a Viable Artist Strategy #

Having established that “bullshit makes the art grow profounder”, the authors go on to write that it can therefore be a viable “low-cost strategy for gaining advantages in prestige awarding domains”:

An agent working towards being successful in a domain, can engage in the long and arduous process of acquiring expert skills and knowledge that they could then leverage to accomplish certain goals. Alternatively, an agent could engage in a less effortful process that produces similar benefits (i.e., impressing others with bullshit). […] A quick and efficient way to impress others in this manner is with claims that imply, yet do not contain, any specifically interpretable truth or meaning (i.e., with bullshit).[12]

Is the contemporary art world full of grifters? Turpin et al. do not exactly show (or attempt to show) this. It is a prediction that they make based on their theory that it should be competitively advantageous and on their finding that people judge “pseudo-profound bullshit” similarly to International Art English (IAE) statements:

If the world of abstract art does in fact represent an ideal environment for bullshit to be deployed as an effective low-cost strategy for gaining prestige, then one would expect the presence of bullshit to be widespread in this domain.[13]

If that were true, I would think that the “pseudo-profound bullshit” strategy would have outcompeted all sorts of mundane titles like Number 3 (Pollock) or Composition No. 10 (Mondrian) by now, since it requires little effort and produces superior results. If it can’t even do that, it doesn’t seem like an effective strategy. So does it? I don’t know for sure, but I did have a look at the MoMA collection data set. I took all their paintings since 1900 and used some (admittedly imperfect) regular expressions to label each painting as having a mundane title or not. Then I modelled the prevalence of mundane titles each year. This plot shows the medians and interquartile ranges of the model’s posterior distribution: 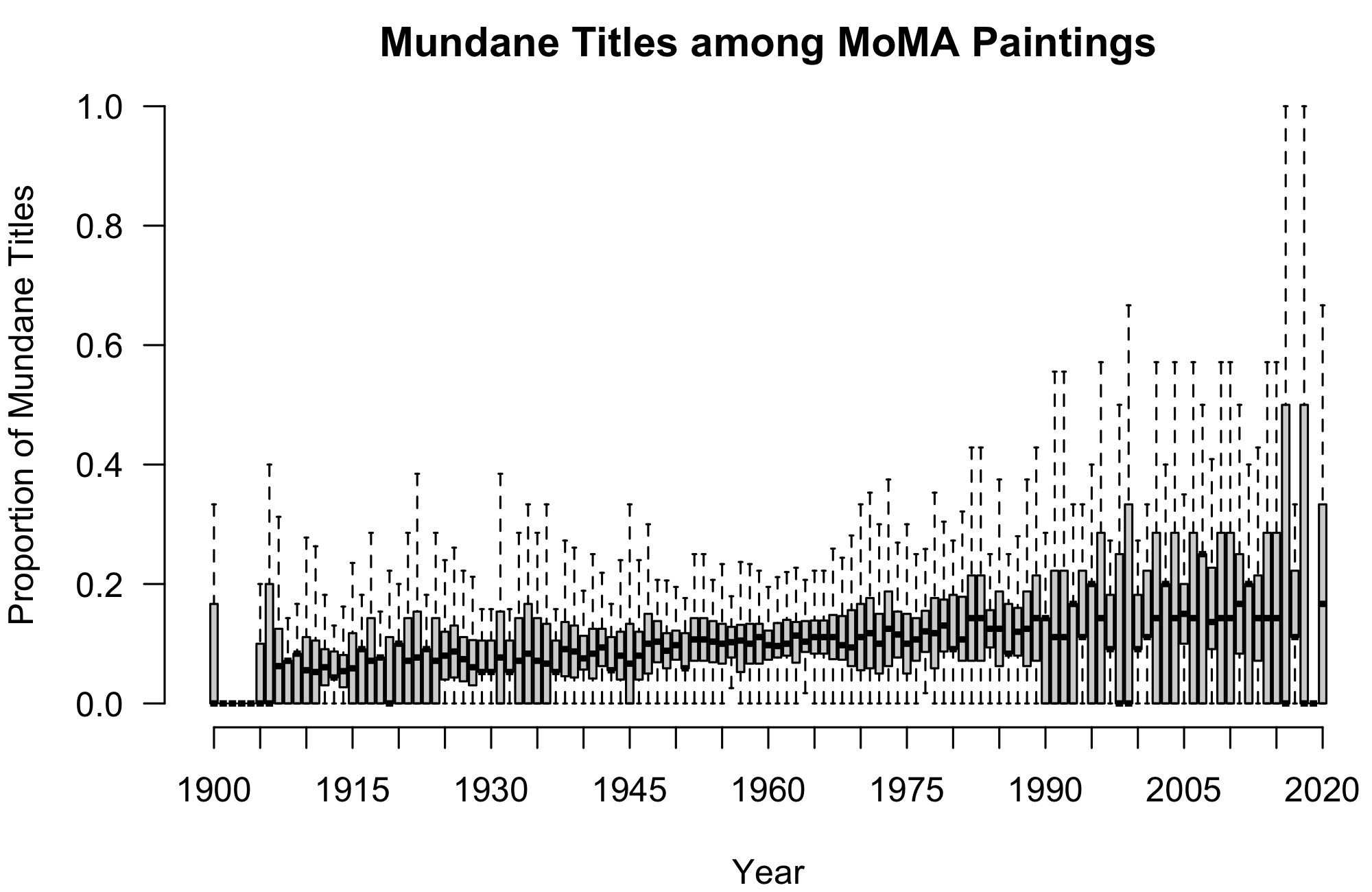 The variance increases in the modern era due to the smaller sample size, but judging from this plot, mundane titles have if anything been steadily increasing in popularity during the last 120 years. It is true that procurement at MoMA is carried out by world experts, and Turpin et al. do write that one should expect, “[if] art expertise does allow one to spot the fakery characteristic of bullshit, […] that art experts, unlike non-experts, would not have their judgements of a piece of art affected by the presence of bullshit.”[14] It’s possible that bullshit is more common and successful in the lower strata of the art world. But in the professional contemporary art world, at least, it does not seem to be a significant force.

I suppose my main issue with the study is that it seems to imply that artists are bamboozling their audiences. This requires (1) artists to intentionally use so-called bullshit with the intention of misleading the audience; (2) the audience to be misled by the so-called bullshit (as opposed to being willing participants); and (3) artists really using “pseudo-profound bullshit” in the wild. But I am not sure any of those things are actually widespread.

That said, it is difficult for anyone who has read any number of artists’ statements, exhibition guides, art magazines and so on to shake the suspicion that there really is a lot of bullshit (in every sense of the word) in contemporary art. My wife just reminded me of something that I’d forgotten. She told me how, at an exhibition at Kunstraum Kreuzberg/Bethanien last summer, with the very IAE title Interstitial Spaces, I had gone missing for a while. She found me, at my patience’s end, in a room with a row of plinths or something like that, on which rested a number of pink books that I was reading. I had already found no less than ten grammatical errors. That’s how a Words’ Rights Activist is made.