This post is part of a series on divers philosophical matters: 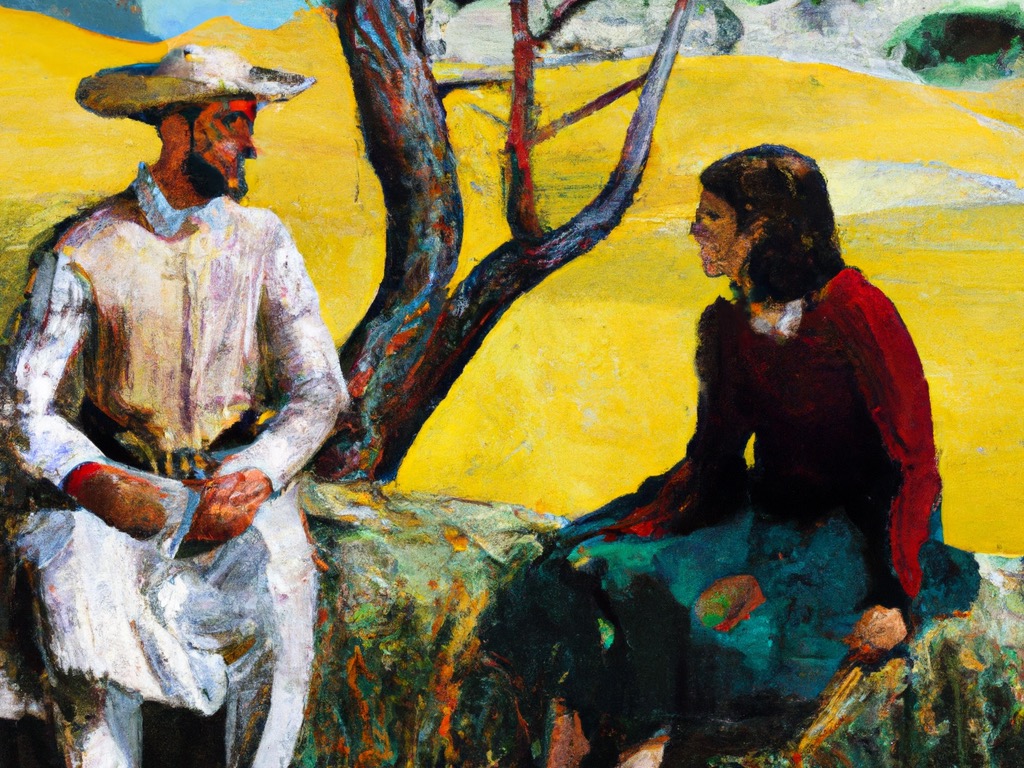 Self-love but serves the virtuous mind to wake,
As the small pebble stirs the peaceful lake;
The centre moved, a circle straight succeeds,
Another still, and still another spreads;
Friends, parent, neighbour, first it will embrace;
His country next; and next all human race;
Wide and more wide, th’ o’erflowings of the mind
Take every creature in of every kind.[1]

Thales, according to Herodotus, Duris, and Democritus, was the son of Examyas and Cleobulina, and belonged to the Thelidae, the noblest Phoenician descendants of Cadmus and Agenor. […] Aristotle and Hippias say that he attributed souls even to inanimate objects, arguing from the magnet and from amber.[2]

ENDEQUINA: There you are, Auderico, sitting on the trunk of that toppled tree, dispirited, brooding, as if the wolf had come out of the forest to prey on your sheep. What happened to you, man? You used to be the lion of our village. The sight of you now makes me feel saddened myself. I remember how radiant you were, like the mother of a newborn babe, but always and everywhere. The air itself, which then seemed a kind of wine for you, now seems more a choking fume.

AUDERICO: My sweet Endequina, I will tell you why I’m sitting here weeping like a heartbroken lover. I was bringing my flock down from the mountains and something happened which upset me – it doesn’t matter what, but I flew into a rage and in my anger broke this staff against the naked rocks. Then a terrible sadness came over me, because the staff, though it may not look much to you, was dear to me. I carved it myself, you see, on the day that my father first asked me to take his sheep into the mountain pastures; and it has been with me ever since, seventeen years, steadying my feet as I walked and guiding the sheep I was herding. It wasn’t that I had deprived myself of its usage. It was that I had somehow wronged it. I hadn’t treated it with the gratitude and respect that it deserved. And I came to thinking. Why do we wince when things break? Why are we saddened when we see decay and atrophy? Why does it anger us to see churches or gravestones desecrated? Why do we talk of treating mere tools with respect and look down on wilful destruction of things?

ENDEQUINA: I am sorry to hear about your misfortune, old friend. But I don’t know what troubles you so. A shepherd’s staff is a fine thing, but easily replaced. I hope you never lose anything of more value, like a child or a spouse or a favourite dog: it might not cut you so lightly.

AUDERICO: Then let me explain myself. You remember how an unruly mob rushed and captured the king’s castle not seven years ago, on the calends of May, do you not?

ENDEQUINA: There is not a person in this village who does not remember that far-reaching day, Auderico, as you know.

AUDERICO: Then you remember also that people were describing that attack using verbs like “disrespect” or “violate”, almost as if the mob had wronged the building itself?

ENDEQUINA: I do remember that.

ENDEQUINA: Are you throwing riddles my way now, Auderico? They use them for their trades.

AUDERICO: Hmm, well, yes, that’s true, but what else do they do at times? It is something that mothers and fathers do with their children.

ENDEQUINA: They name them, of course. But tell me, where are you getting with all this?

AUDERICO: Forgive me my coyness, Endequina. The whole business with my staff has made me talk like an old white-bearded philosopher or something, instead of the dull-witted shepherd that I am. I will quickly get where I am going, if only you will allow me to do so by continuing my questioning.

ENDEQUINA: By no means are you dull-witted. But go ahead.

AUDERICO: There’s a philosopher far away on an island of scorching deserts and piss-weak creeks who says that our human caring and compassion is like an ever-expanding circle.[3] It’s like a circle in that it grows outwards to encompass more and more things. Where once we cared only about ourselves and our family, we now care about the people of our district and even people of other districts. You yourself, Endequina, take good care of your animals, almost as if they were children of yours. Was it not as unfathomable to those ancestors of ours that one should care about people to whom one stands in no relation at all – was that not as strange to them then as it is to us now to think that one should care about lifeless objects in the same way?

ENDEQUINA: Yes, it may well have been as strange to them as this is to us now.

AUDERICO: And shouldn’t that give us some pause? and make us wonder whether we are not in the wrong, too, just like our ancestors were?

ENDEQUINA: It may well give us pause, Auderico, but there is a categorical difference between the things we care about and those that you have in mind. The difference is between that which lives and that which does not. So your philosopher’s circle may well expand, but it’s in the direction of fungi and microorganisms that it expands, not in the direction of lifeless objects.

AUDERICO: So you say. But a pebble and a diamond are alike to the blind.[4] Let me ask you this. Do you agree, sweet friend, that we have a duty to promote the good of others, at least when it is not inconvenient for us to do so?

AUDERICO: So, then, if you thought that objects could have a good, you would agree that we can also have duties towards them?

ENDEQUINA: I would, but I do not.

AUDERICO: But isn’t gentleness and respectful handling good for a shepherd’s staff, just like food, sleep and quenching water are good for us? And, on the opposite side of the same coin, wasn’t being smashed against a rock bad for my staff, just like painful diseases and bodily damage are bad for us?

AUDERICO: I understand. Your distinction is a sound one, noble Endequina. But does it really matter whether a thing is good functionally or good in the final sense? Either way we use the word “good”. We use it to judge the quality or desirability of that thing. Why should only the final good create an obligation for us and not the instrumental good?

ENDEQUINA: That is a good question, dear Auderico, thoughtful friend. I am not sure if that is true, but I think we are nearing the crux. Now I wish to ask you something. Do you agree that living things have points of views, but lifeless things don’t?

ENDEQUINA: And do you agree that humans and other animals strive to keep themselves alive and well-functioning?

ENDEQUINA: And that these animals, in their continual striving to flourish, to keep on striving, having their points of views, can experience things as good or bad for them when their strivings are fulfilled or thwarted?

ENDEQUINA: But lifeless objects have no points of views. Neither do they strive to keep themselves alive and so on. They cannot experience things as good or bad for them. They have no strivings that can be thwarted or fulfilled. And because of that, they cannot take the things that are good for them to be good in the final sense.

AUDERICO: That all seems reasonable to me, Endequina. I suppose you are saying that, because my shepherd’s staff neither strived nor had a point of view, because it did not experience being broken as something that was bad, I did not have a duty requiring me not to break it. The only duty I had was towards myself, because the shepherd’s staff was a kind of moral intermediate, such that its good was also my good, because I had made it so. And though the feeling I felt towards it was real, its foundation was illusory … I will think about this, dear friend, as I go into the woods to carve myself a new shepherd’s staff of pale-brown ash.